This week there was a surprise flowering at the Cambridge University Botanical Gardens. The plant known variously as Titan arum or Corpse flower bloomed after a gap of 11 years. Titan arum (Amorphophallus titanum) are native to Sumatra and are one of the worlds stinkiest and largest flowers described as rotting meat, moth balls, old socks etc. 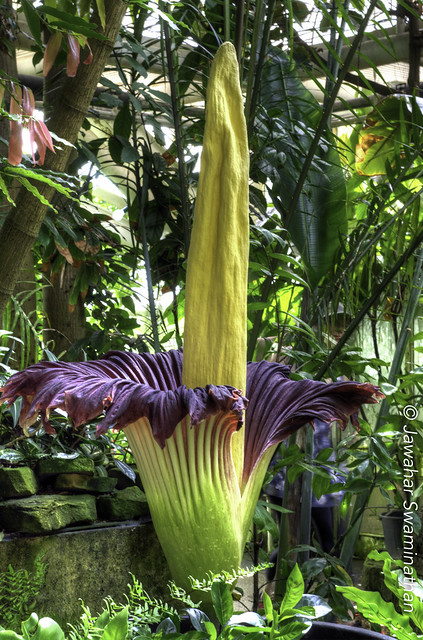 Thankfully the worst of the smells are in the night time and I conveniently missed it! The photograph above is a HDR of 3 bracketed shots at -2, 0 and +2 stops. Shot with a 35mm f/1.8 Nikon lens on a Nikon D7000. Processed in Photomatix Pro.

As most everyone else my visit to Keukenhof Tulip gardens 3 years ago resulted in the purchase of tulip bulbs. Many of these lasted one season only but the one below has been a repeat flowerer. The is the Estella Rijnveld Parrot Tulip with bright red and creamy wavy petals. They are indeed spectacular, are they not? 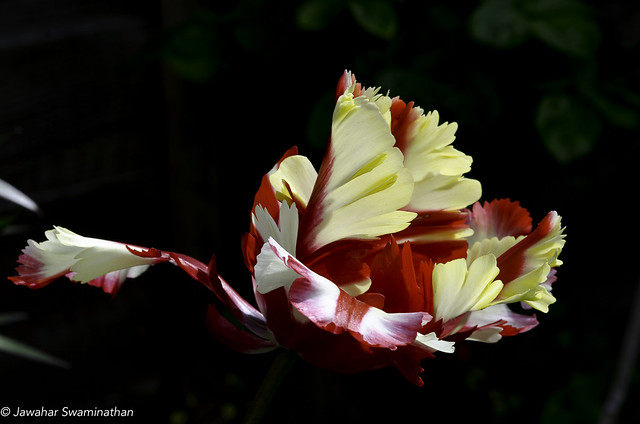 There is this rose bush in my garden which struggles to survive every year regardless of what I try to do make it feel happy. But year on year it produces one or two of these really vibrant flowers in autumn! Just one of two roses sadly before the winter frosts kick in.

This year I grew cosmos plants for the first time (from seed that too).. and they’ve now grown to a height of about 2 metres!! Lovely pink flowers held up on thin stalks. The height of these flowers means that they’ve opened themselves up to being photographed from underneath against the backdrop of the blue sky (as below). 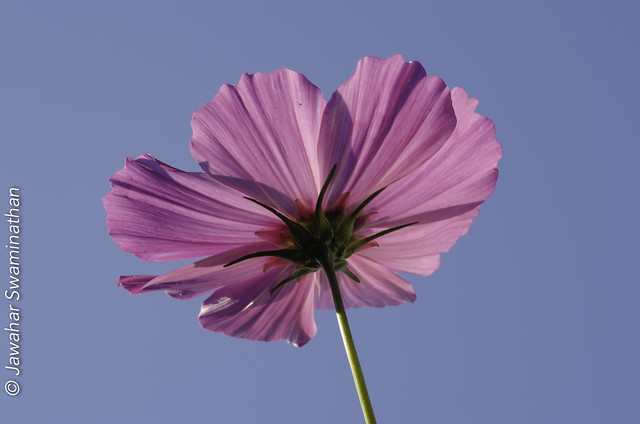 In a German legend, when god had finished naming all plants, a small unnamed plant cried out “Forget-me-not, my lord”. Then god said “That shall be your name”. Another legend claims that after the Creator thought he had finished giving the flowers their colours, he heard one whisper “Forget me not!” There was nothing left but a very small amount of blue, but the forget-me-not was delighted to wear such a light blue shade.

The tiny, cheerful blue flowers of Myosotis have played an important part in European folklore and history – from being used as a symbol by Henry Bolingbroke (later Henry IV) after being exiled by Richard II to its adoption by the Freemasons during the Nazi regime across Europe. The flowers of forget-me-not are no more than 1cm in diameter and grow in long thin stalks bearing many flowers. They are popular in gardens and grow on the side of river banks and streams throughout Europe.

For all the beauty and colour of the strawberry fruit, the Fragaria blossoms are small, white flowers with a yellow centre (about a centimetre across). The following photo is of a wild strawberry flower shot with a macro lens with extension tube attachments (hence extreme macro). Strawberries below to the rose family and have 5 sepals, 5 petals and many stamens arranged spherically. 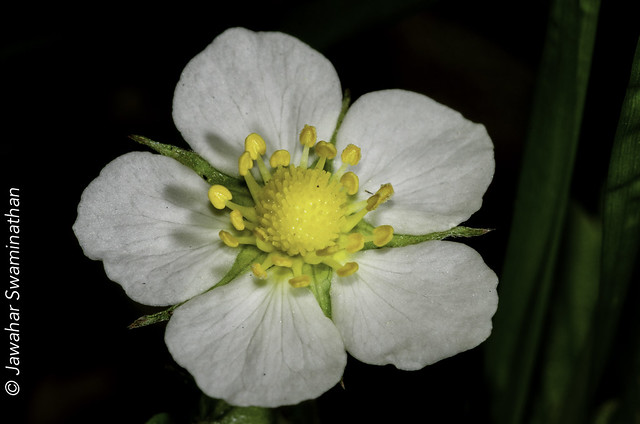